"I am pleased that our employees remained focused on their work – improving our safety record year over year – and serving our customers across our chlor-alkali, compounds and building products businesses," said Axiall President and CEO Tim Mann. "We believe our pending strategic combination with Westlake Chemical Corporation will drive significant value for our customers and business partners as we create a North American chlorovinyls leader with a highly integrated chain, diverse product portfolio and a globally competitive cost structure. We are working closely with the Westlake team to ensure a smooth transition and plan to complete the transaction as expeditiously as possible."

In the Chlorovinyls segment, net sales were $578.4 million for the second quarter of 2016 compared to $666.1 million for the same quarter of the prior year. The segment posted operating loss and Adjusted EBITDA of $37.1 million and $42.0 million, respectively, in the second quarter of 2016, compared to operating income and Adjusted EBITDA of $37.8 million and $89.0 million, respectively, for the same quarter in the prior year. The decreases in net sales and Adjusted EBITDA were primarily due to lower PVC, VCM and chlorinated derivatives sales prices; lower electrochemical unit ("ECU") values, especially with respect to caustic soda prices; and lower sales volume driven primarily by the extended timing of a scheduled turnaround at our Plaquemine, La., VCM facility. The unfavorable factors for Adjusted EBITDA were partially offset by decreases in the cost of ethylene and natural gas.

On June 10, 2016, the company entered into an agreement and plan of merger with Westlake Chemical Corporation ("Westlake") and Lagoon Merger Sub, Inc., a newly formed wholly owned subsidiary of Westlake.

On August 1, 2016, Axiall filed a definitive proxy statement with the United States Securities and Exchange Commission (the "SEC") to notify the company's shareholders of a special meeting to be held on August 30, 2016 to vote on the proposed merger with Westlake (the "Merger"). Axiall and Westlake have received all regulatory approvals required for the Merger, including approvals required by U.S. and Canadian competition laws.

The company has terminated its previously announced sales process for the remainder of its Building Products business.

Axiall Corporation is a leading integrated chemicals and building products company. Headquartered in Atlanta, Axiall has manufacturing facilities located throughout North America and in Asia to provide industry-leading materials and services to customers. For more information, visit www.axiall.com.

• the failure to receive the required approval for the Merger from the company's shareholders;

• the risk that a condition to the closing of the Merger may not be satisfied;

• the diversion of management's time on Merger-related issues and other potential operational disruption caused by the Merger that may make it more difficult to maintain relationships with customers, employees or suppliers;

• the risk of potential litigation related to the Merger;

• the costs and operating restrictions associated with compliance with current and future environmental, health and safety laws and regulations;

• the availability and pricing of energy and raw materials;

• risks, hazards and potential liabilities associated with manufacturing and transporting chemicals and building products, including, among others, explosions and fires, mechanical failures, unscheduled downtime and related litigation;

• changes in the general economy, including the impacts of the current, and any potential future, economic uncertainties in the housing and construction markets;

• risks, costs and liabilities associated with pension and other post-retirement employment benefit plans;

• competition within the industry in which the company operates;

• strikes and work stoppages relating to the workforce under collective bargaining agreements;

• the failure to realize the benefits of, and/or disruptions resulting from, any asset dispositions, asset acquisitions, joint ventures, business combinations or other transactions;

• shared control of the company's joint ventures and similar arrangements with unaffiliated third parties, including the ability of such joint venture partners and other counterparties to fulfill their obligations;

• costs resulting from complications or delays relating to the company's arrangements with Lotte Chemical USA Corporation related to the ethane cracker (ethylene manufacturing plant) being constructed in Lake Charles, Louisiana;

• the failure to adequately protect the company's data and technology systems;

• the company's ability to successfully implement and administer its cost-saving initiatives (including restructuring programs) and produce the desired results (including projected savings); and

• other factors discussed in the company's SEC filings from time to time, including the Company's Annual Report on Form 10-K for the year ended December 31, 2015 and subsequent quarterly reports on Form 10-Q. 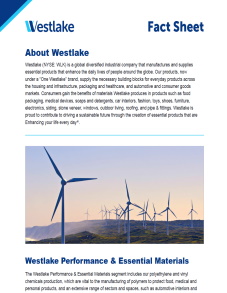